The butterfly experiment at Fishkill Farms just added another milestone to its success record: On July 6th three large Monarch Caterpillars (all 4th Instar, about 10 days old) were discovered munching away on the blazing Orange Butterfly Weed row planted in 2020. They are likely the progeny of several Northern-migrating Monarch Butterflies spotted at the farm in late June, and hopefully the first caterpillars of many more to come. 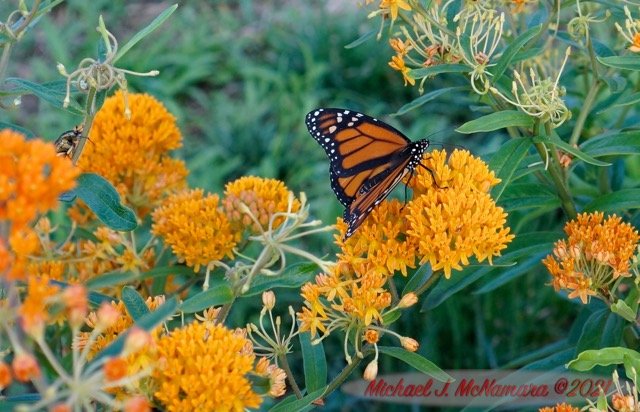 Last year, Monarch Caterpillars didn’t show up on these carefully chosen milkweed plants until late August. It’s not that Northern-migrating female Monarch Butterflies weren’t laying eggs in late June of 2020 on other milkweeds in the area, but since our Orange Butterfly Weed plants were grown from seeds and planted in early June of 2020, they weren’t mature enough to attract egg-laying Monarchs until later in the Summer. Even as seedlings, these plants nurtured enough caterpillars to help us raise and release several dozen healthy Monarch Butterflies during September and October. Most of these immediately began their Southern migration back to the Monarch Butterfly Biosphere Reserve near Macheros, Mexico. (We don’t tag the butterflies, so we’ll never know how many actually made the trip.) 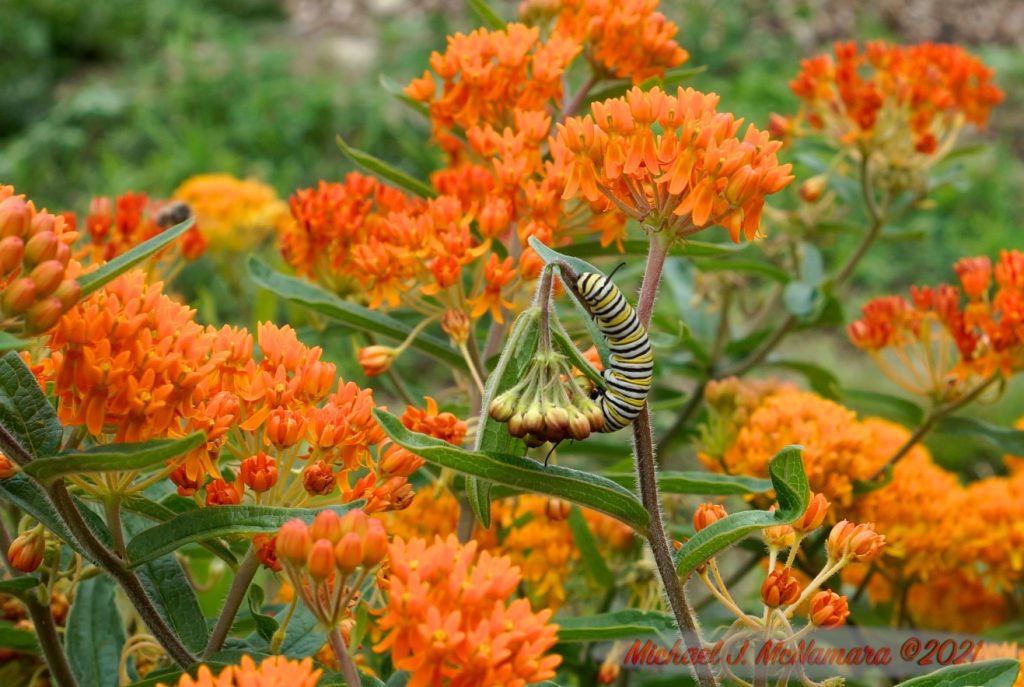 Why is an early caterpillar discovery such an important milestone to our farm experiment, which is designed to help increase the population of Monarch Butterflies and other important pollinators (butterflies, bees, hummingbirds, etc.)? For starters, it means the Orange Butterfly Weed plants are doing their dual-purpose job earlier than anticipated. First, by attracting egg-laying female Monarch Butterflies as they pass through on their migration North, and second by providing plenty of nectar for male Monarchs and other pollinators—including an amazing number of honey bees and bumblebees (over 300 bees on a recent count). There are several reasons for their decline. First, host milkweed plants for egg-laying females are getting harder to find. Second, Monarch predators are on the rise. For example, the Stink Bug and Tachinid Fly, both invasive species, can kill full-grown Monarch Caterpillars), while OE spores and other parasites target the Monarch throughout its lifecycle. Finally, extreme climate events are on the rise (10’s of millions died in Mexico several years ago after a rare winter frost.)

The Mystery of the Migrating Monarch: 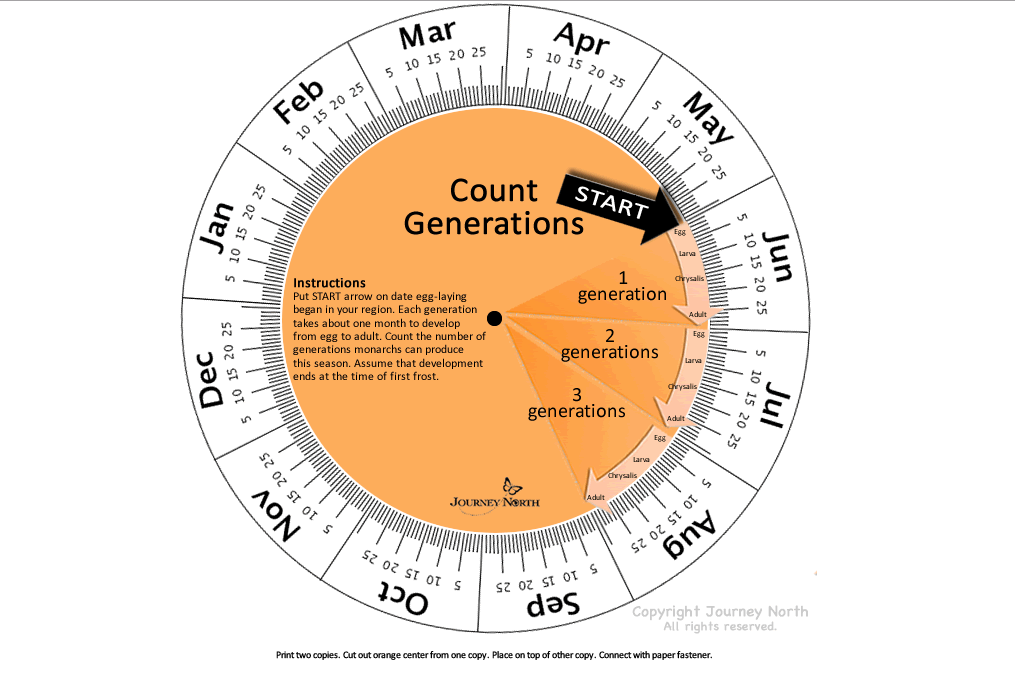 The Circle of Life: Explains the migration and multiple generations of the Monarch. It takes 4-5 generations and at least 8 months to complete the migration, and no one butterfly makes the entire round trip journey. Monarchs arriving in the Hudson Valley in June & July are likely third-generation Monarchs.

By now, most butterfly enthusiasts and gardeners in the Hudson Valley have seen their first Monarch Butterfly of the year. If you have time, please take a few minutes to document your sighting at JourneyNorth.org. Doing so will help establish the Hudson Valley as a well-traveled route for migrating Monarch Butterflies, and justify an increase in Monarch-friendly habitats along that route.

The official start of the migration begins in early-to-mid February when millions of wintering Monarchs (some born as far away as Canada) leave the oyamel fir forests in Mexico and begin the Northern phase of the migration. These wintering butterflies are also called “Super-Monarchs”  because they’re slightly larger on average, and live up to 6-months versus 2 months for Monarchs born between February and September.

Once they awaken and take flight in February, the Monarch Butterflies begin mating and laying eggs. It’s then up to the next 3-4 generations to complete the Northern phase of the migration which extends all the way to Eastern Canada. The cycle from egg to butterfly takes about a month (half the time spent as a caterpillar, and half in a chrysalis transforming into a butterfly). That means that no one butterfly completes the entire migration, which is unusual for migrating animals.

From mid-September on, all new Monarch Butterflies are born as Super-Monarchs, ready to begin the arduous 2,500-3,000 mile Fall migration from North America to Mexico, stopping along the way only to eat and sleep. They do not mate until after they spend a month or two in the pine forests gathered in large clusters, described on the U.N.’s World Heritage Site:

“Up to a billion monarch butterflies return annually, from breeding areas as far away as Canada, to land in close-packed clusters within 14 overwintering colonies in the oyamel fir forests of central Mexico. The millions of monarch butterflies that return to the property every year bend tree branches by their weight, fill the sky when they take flight, and make a sound like light rain with the beating of their wings”.

By late September the 4th or 5th generation released at the farm contains young “Super-Monarchs” intent on heading South all the way back to Mexico—that is, if they’re born East of the Rockies. Monarchs born West of the Rockies head South to a wintering spot in Southern California. No one really knows why the butterflies do this, or how the Eastern Monarchs manage to navigate to a small forest nearly 3,000 miles away without using a GPS. Nor do we know why Monarch Butterflies, which are native to both North and South American continents, and were introduced to the East Coast of Australia in the mid-1800’s, are much closer genetically than other insects and animals found in all three continents. These are just a few of the unsolved mysteries that can only be solved if the Monarch Butterfly is protected and studied, especially as their numbers have decreased dramatically in the last few decades.

My favorite reason to protect them? They’re beautiful photo and video subjects, and their transformation from a “lowly caterpillar” to a majestic flying butterfly that can navigate cross-continents serves as an inspiration for all who study them. If the experiment at Fishkill Farms continues on track, we predict there will be plenty more of them flying around the farm this year laying eggs on our milkweed and eating their fill in our flower gardens—now located closer to the farm store and cider bar. So bring your binoculars, cameras, and yes, your cell phones—there’s nothing like the challenge of taking a selfie with a butterfly in it! 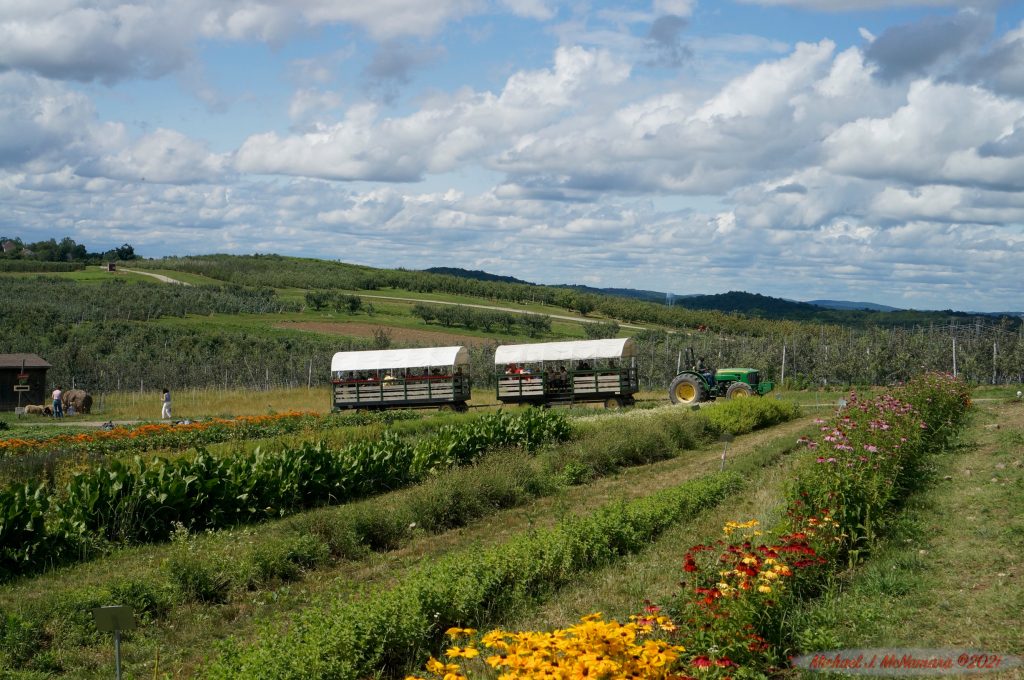 Michael J. McNamara is a life-long resident of the Hudson Valley and a widely-published photojournalist and videographer. A selection of his nature and commercial portfolios can be viewed at www.McPhotoVideo.com and on YouTube at McNamaraReportTV. You can also follow him on Instagram at McNamara_79, and on TikTok at MonarchWhisperer.