What’s Your Favorite Butterfly? And How Can You Make It Happier? 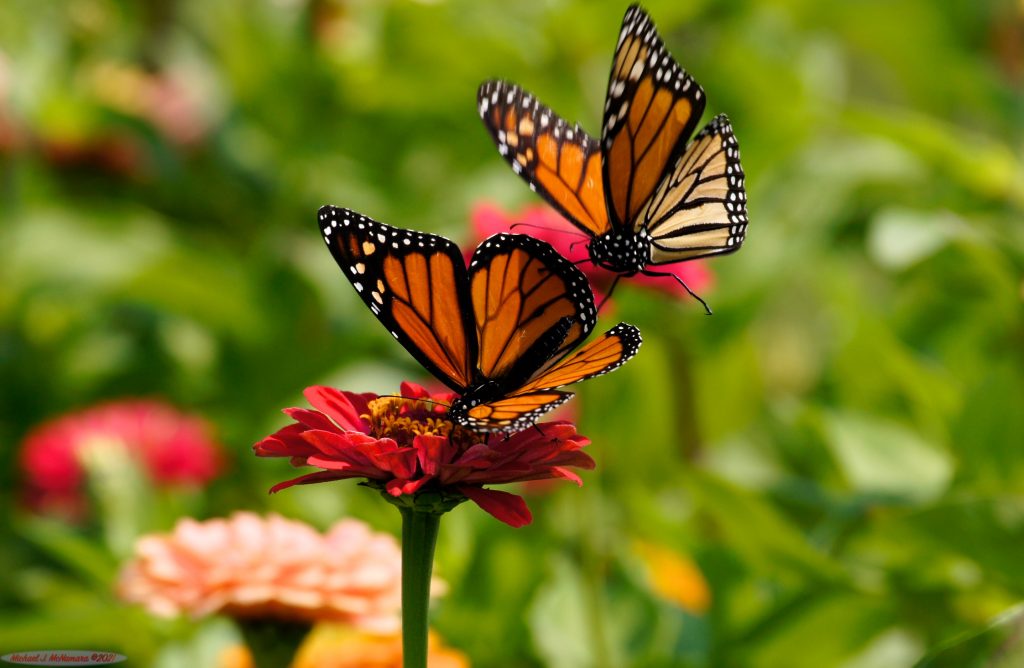 Monarch Dance: Two male migrating Monarch Butterflies play tag with each other in the flower gardens at the farm. This happens on a regular basis, and often leads to the pair spiraling upwards and around each other for 10-15 seconds. That spiraling is also part of the mating ritual for male and female butterflies, but with two males the reason is unknown.

Have you ever taken a selfie with wild butterflies flying around you? Or gotten so close to a butterfly that you could hear its wings flap as it flew to another flower? For most people, the answer to both questions is “WHAT? Are you kidding?” But for Summer visitors to Fishkill Farms’ expansive flower gardens the answer is more likely “Yes! Want to see my phone shots?”  That’s because right now, and for the next two months, those gardens are like an organic grocery store for butterflies, offering hundreds of flowers and a relatively safe place for all sorts of pollinators to feed and breed. For butterflies, having access to an unlimited source of food also seems to have two unusual effects on these otherwise skittish creatures. First, they slow down while eating, and second, they let humans get much closer than normal. And by close, I mean within inches, not yards.

I became a fan of these flower gardens several years ago when I noticed how many Monarchs, Yellow and Black Swallowtails, Great Spangled Fritillaries, and many other native butterfly species were swirling around, and how easy it was to take their pictures. Till this day, I haven’t found any butterfly gardens in lower NY (including several that charge entrance fees) that come close to containing as many migrating Monarchs and native butterflies on any given sunny day between mid-July and early-October. To give you an example, this year on July 30th (around noon, when most butterflies are as active as they get) within 1/2 hour I counted over a dozen migrating Monarchs and at least three dozen native Swallowtails  (Yellow, Black, and Spicebush), as well as several Great Spangled Fritillary. I didn’t even try to count the smaller butterfly species I saw in far greater numbers, including Sulphurs, Red Admirals, and Viceroys (a Monarch look-alike, although much smaller), or the hummingbirds and other pollinators present. My observations centered around the rows of colorful Zinnias, Cone Flowers, Orange Butterfly Weed, and flowering herbs that are all located within close proximity and viewing distance to the farm’s porch and cider bar. 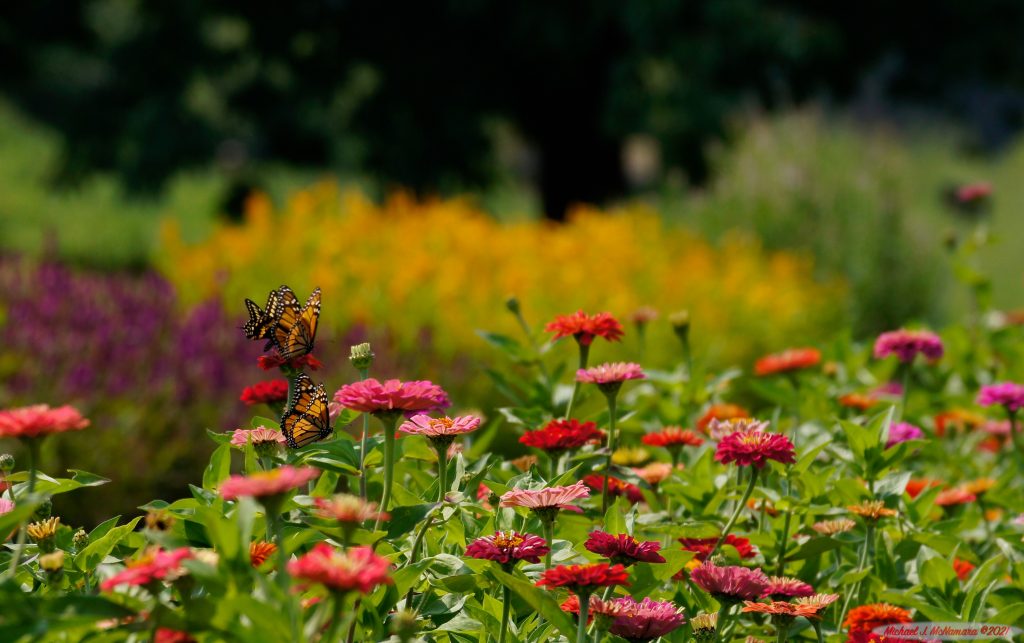 Flower Power: Two Monarchs and a Black Swallowtail enjoying an unlimited supply of nectar on the Farm’s row of colorful Zinnias. You can see dozens of these butterflies in less time than it takes to drink a water bottle.

My experience is not unique. Whenever I’m in the gardens taking pictures of butterflies or searching for Monarch caterpillars on the farm’s long row of Orange Butterfly Weed (a favorite milkweed host for egg-laying Monarchs), I constantly hear visitors expressing their amazement at the number of butterflies they’re seeing and how close they (and their kids) are able to get to these beautiful creatures. If you love butterflies, multiple visits to the farm’s flower gardens should be on your to-do list this Summer. There’s no fee, but while you’re there you can help support the farm’s butterfly and pollinator initiatives by sharing your photos and experiences with friends on social media, and/or cutting and purchasing your own fresh flower bouquets (a great deal!).

WHAT IS THAT BUTTERFLY I’M SEEING?

To help you identify several of the most common butterflies you’re bound to see at the farm (there are over 57 butterfly species native to NY, so this list is limited to the larger ones previously mentioned), as well as the favorite host plants each species requires for its larvae (caterpillars) to thrive, I’ve put together the following photos and data. If you want to attract and breed these butterflies in your own gardens, consider adding some of the flowering plants and herbs listed. But never use pesticides on them! (More tips on raising Monarchs and other butterflies in an upcoming blog.) 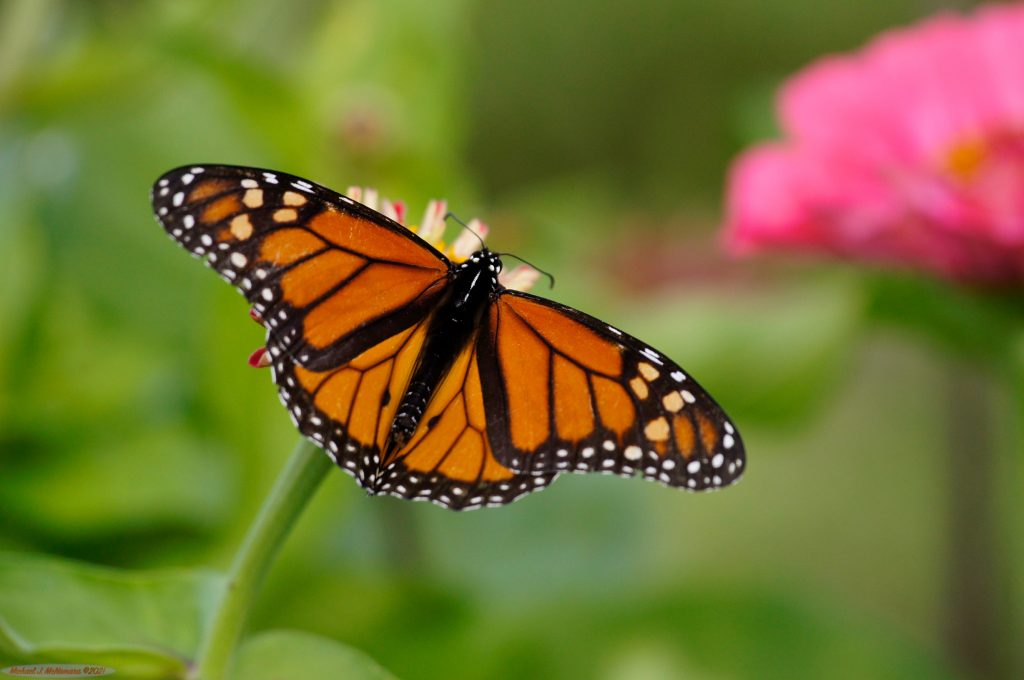 Is it a Male or Female Monarch? That’s easy to tell
once the wings are open. Male Monarchs have two
black dots, each located on the hindwing on either
side of the black tail. 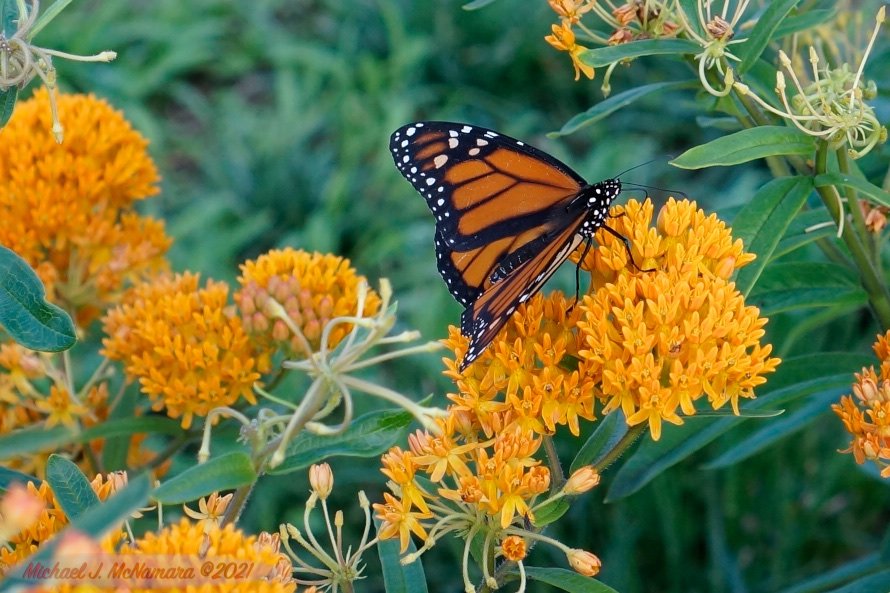 Monarch Baby Food: Female Monarchs will only lay their eggs on milkweed plants, and from my
experience Orange Butterfly Weed is one of the favorite varieties.

1. Monarch Butterfly (Danaus plexippus): The only migrating butterfly found in the NorthEast, the Monarch Butterfly will eat from just about any flowering plant, and really loves Zinnias and Coneflowers. However, the female will only lay its eggs on milkweed plants, which are not only poisonous to most other insects and animals, but provide the adult butterfly with some toxic protection against birds and other predators. (Contrary to popular opinion, there are several predators including Stinkbug larvae and parasitic wasps, that eat or infest Monarch caterpillars.) Nationwide, there are over 2 dozen varieties of milkweed plant available, but in the NorthEast and NY the most common are Swamp Milkweed, Purple Milkweed, Common Milkweed, and my favorite: Orange Butterfly Weed (also called Pleurisy Root because its roots have widespread medicinal value). Avoid planting Mexican Milkweed and other non-native milkweed plants. In my experience, Monarch females seem to prefer laying eggs on younger or healthier milkweed plants. 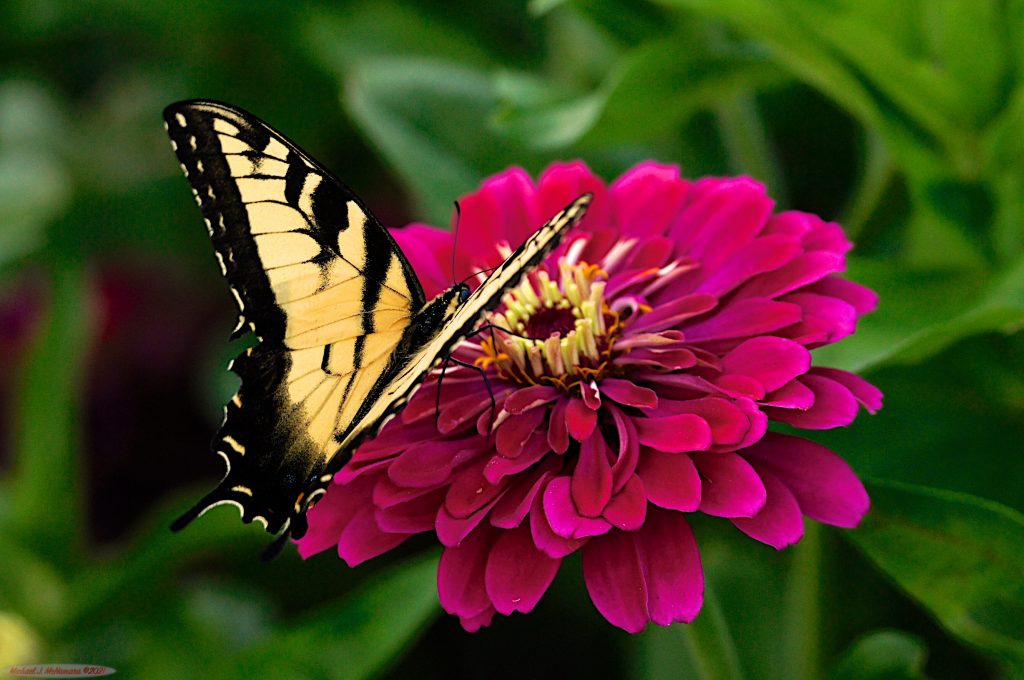 Bold and Beautiful: This male Eastern Yellow Swallowtail is one of the most popular native butterflies. See the article on how to tell the difference between it and other Swallowtails

2. Eastern Yellow Swallowtail (Papilio glaucus): Due to its large size (up to 5.5 inch wingspan), normally bright yellow wing colors and wing patterns, this butterfly is probably the easiest to identify from a distance. The male is yellow with a black border on its upper wings and often nicknamed Tiger Swallowtail due to its four black forewing stripes. The female may be either yellow or black. On the yellow female version, you’ll find several blue spots along the hindwing, while the black version is almost completely black on the upper wing and has shades of gray on the upper and lower wings. The female lays its eggs on all species of magnolia and rose bushes, and several broods can be born throughout the summer months. 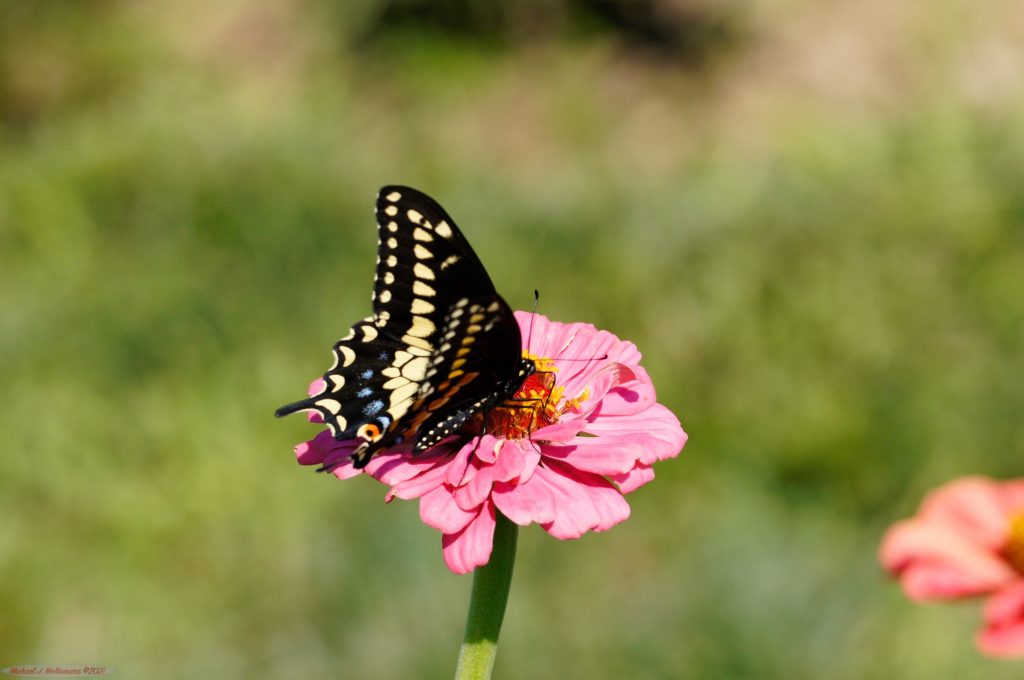 Black Beauty: The Black Swallowtail is another local favorite,
and can easily be confused with a female Yellow Swallowtail,
which is often mostly black. 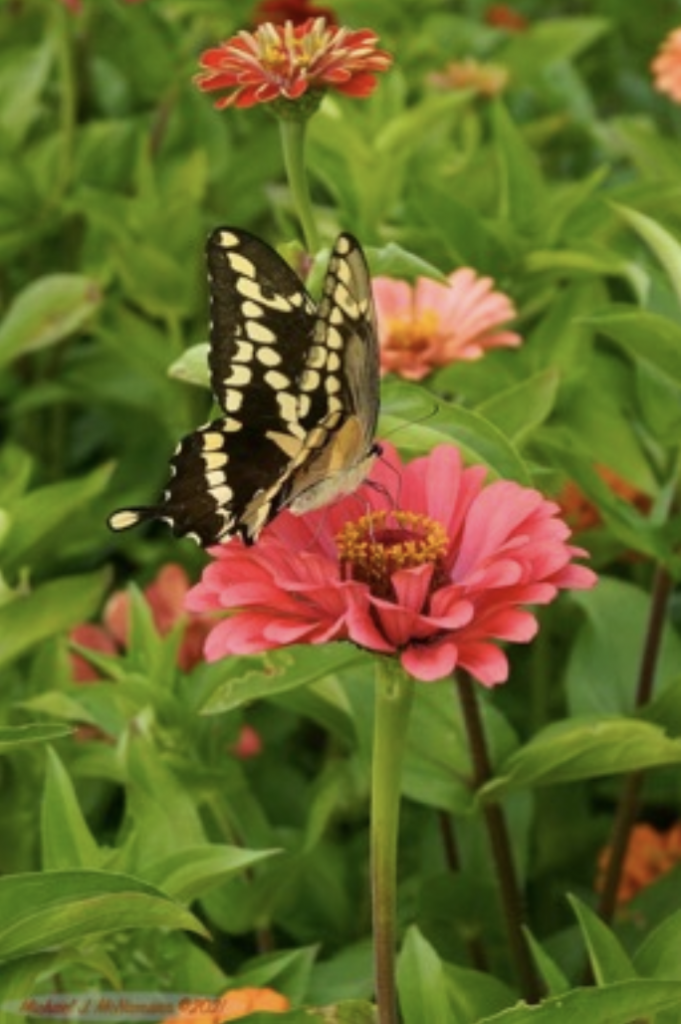 Queen Butterfly: Also a member of the swallowtail family, the rare Queen is the only other butterfly besides the Monarch to lay its eggs on Milkweed plants. Its yellow bottom identifies it from a distance compared to Black Swallowtails.

4. Queen Butterfly (Danaus gilippus): The rarest of the large butterflies in the region (I’ve only seen a handful in the last five years), the Queen looks like a male Black Swallowtail from above and at a distance, but as its wings open you’ll notice a nearly solid line of yellow spanning from wing tip to wing tip, and a yellow border around its lower hindwing. It’s also similar in size (up to 3.3-inch wingspan) to the other swallowtails just mentioned, and has a distinct yellow coloration on the bottom of its wings, unlike the Black Swallowtail. It’s also the only butterfly in this region, other than the Monarch, whose caterpillars thrive on milkweed, and therefore the adult is toxic to most predators. 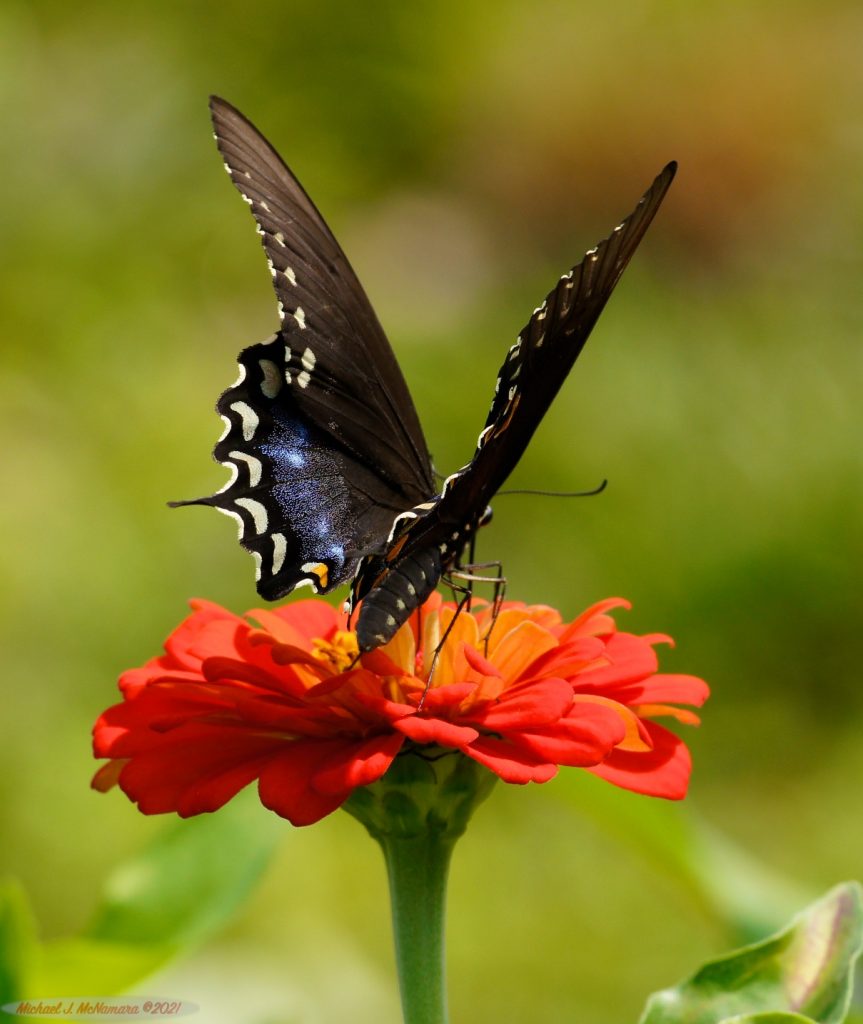 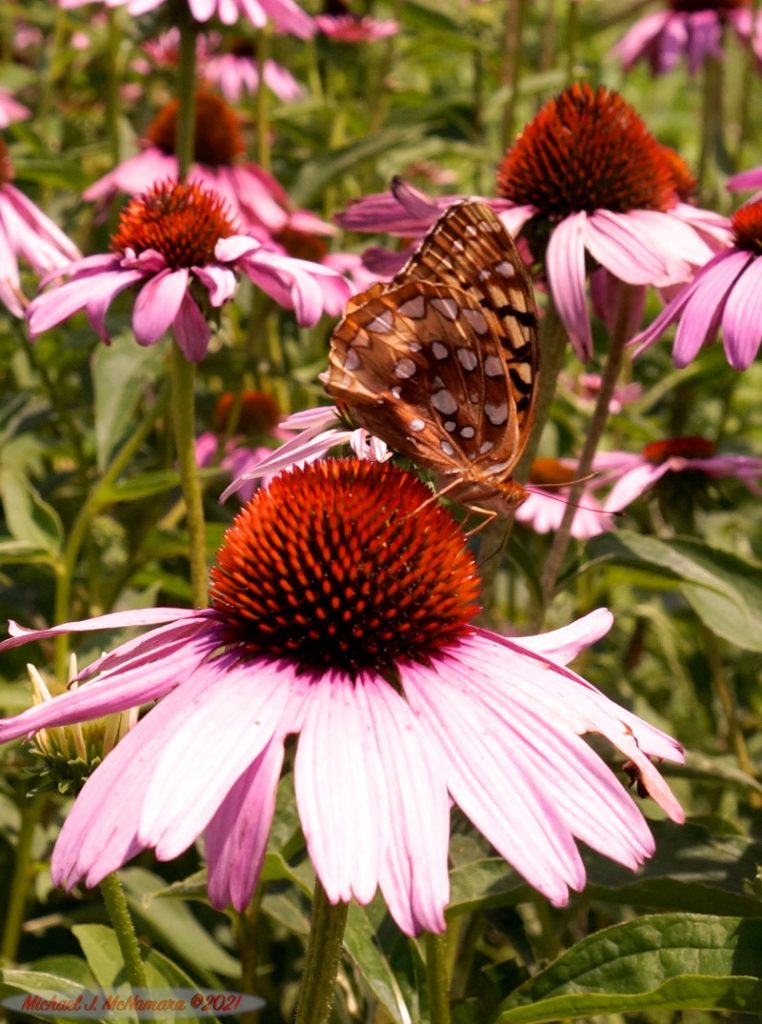 Great Spangled Fritillary: One of the first butterflies to appear in mid-June, this species is getting harder to find due to pressure on its host plant, the wild violet.

6. Great Spangled Fritillary (Speyeria Cybele): Usually among the first butterflies to show up in mid to late June, the Great Spangled Fritillary can easily be confused with the Silver, Aphrodite, and Atlantis Fritillary in regions where they co-exist. However, in lower NY if you spot a Fritillary it’s often this specific version. In my experience, they love to eat from Orange Butterfly Weed, which is often among the first plants to flower (I’ve seen nearly two dozen on one plant). The female lays its eggs on native violets and blue violets, both of which appear to be vanishing from many gardens in the area due to replacement by a wide variety of commercial violets. As a result, it’s getting harder to spot Fritillary in places where they were once among the most plentiful.

Michael J. McNamara is a life-long resident of the Hudson Valley and a widely-published photojournalist and videographer. A selection of his nature and commercial portfolios can be viewed at www.McPhotoVideo.com and on YouTube at McNamaraReportTV. You can also follow him on Instagram at McNamara_79, and on TikTok at MonarchWhisperer.